History: Fairfield Craft Ales opened in early July 2016 with a little help from the crowd-funding site, KickStarter. Mike and Joe have more than 25 years of brewing experience and have always been music lovers. So, it just makes sense that their dream was to open a brewery that serves beer inspired by music.

Food Service: No, they only have some chips and soda. Otherwise it's BYOF.

This weekend we revisited Fairfield Craft Ales (FCA) since we first went during their opening week back in July. This brewery is a stark contrast from its neighbor, Two Roads, just 3 minutes down the road. The small taproom gives this brewery a home-y feel. The first time we visited, we were greeted similarly to the locals on Cheers. We felt welcomed immediately and this time was no different. Although, FCA and Two Roads are very different structurally, they do have one thing in common: they brew good beer. With a classic rock theme, FCA has named all of their beers after old rock songs. When we first visited, we weren't sure what to expect due to the drab and quite ordinary exterior, however it is clear as soon as you walk through the doors, that they have a true passion for beer. In addition to a small bar and seating area there is a touch screen jukebox and a flat screen TV playing the latest sports game or news event.

Harvest Wheat
D: 4/5 - This Belgian wit with lemon is quite tasty.
K: 4/5 - Very good beer! Even though I normally don't like lemon anywhere near my beer, it was delicious.

Dixie Chicken (honey BBQ ale w/ cherrywood smoke, honey, and chili peppers)
K: 3/5 - It isn't everyday you get to taste something like this. Definitely unique! I don't think I could handle a whole pint of this as it tasted to me, like BBQ Lays. Our friend said he tasted chicken but I think that was the rest of the beer he had drank talking. Thumbs up for trying something completely new!

D: 4/5 - I'm sure we'll be back here whenever we're passing through the area. It's just a good atmosphere and definitely good beer. The welcoming atmosphere is the best part and a nice contrast to larger breweries.

K: 4.5/5 - Although this place is much smaller than their neighbor 2R, it's a refreshing new stop in the world of beer. What gets me is the feeling you are in one of your good friends basement trying his/hers home brews. The friendliness and welcoming attitude of this place stands alone and is one of two reasons I'll always come back. The other is the good beer it serves up.

Check them out on social media!

Popular posts from this blog 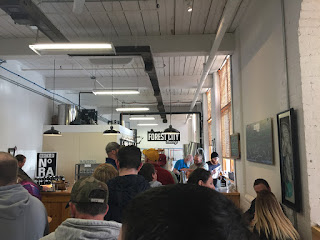 History: Forest City opened about a year ago.

The ScenarioWe pulled up to a long warehouse and entered through an open door with a sandwich board outside displaying the name of the brewery. We were met by a line that extended beyond the inside door of the brewery. People were lined up with coolers and empty growlers ready to fill. Typically, breweries have separate lines for growler fills and drafts/flights but it didn't appear that this was the case here. This resulted in a wait of over 20 minutes (at least) for a single pint. We stayed only until we finished the beer and ventured to the next brewery. Fortunately, we didn't have to go far. We made our way through the warehouse past various artist's workshops and plastic wrapped furniture to our next stop, Stubborn Beauty.  The RatingsGinger Saison
K: 2/5 - Maybe I'm bitter that I had to wait 20 mins for this, but the ginger taste is too strong for me.
D: 3/5 - I enjoyed …
Read more 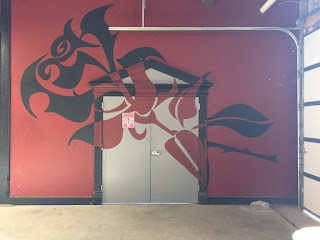 History: Started by two home brewers, Stubborn Beauty has been perfecting their brews since 2009. They have entered their beer in multiple contests throughout the years winning their fair share of awards.


The ScenarioHitting this on the same day as Forest City, we were relieved that there wasn't a long line. Upon walking in the space, we noticed a large amount of people and loud music being pumped through speakers. This is definitely a place to let loose and have some fun while enjoying some delicious beers. We walked up to the bar right away and got served. We were disappointed they didn't offer much of anything besides IPA's and darker beers but we found the Oceanographer's Choice and posted up along the wall with a ledge to set our beer on. When at this brewery, you have two choices for seating: along the walls to stand or long communal tables. All the tables were taken so we took a spot al…
Read more